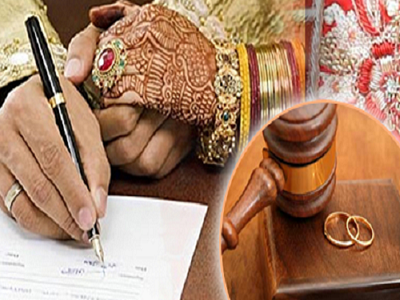 The institution of marriage is a set to bring two human beings closer to each other, so they can celebrate their love, and begin a new life together to enjoy the bliss of conjugal life and live happily.

It is imperative for both of them to think this through before jumping into actions, because a life changing event like such can have both positive and negative consequence in one’s life.

The lure of the romanticism of marriage can be tempting, but the event itself could take a lot of time and meticulous planning, not to mention the huge economical investment which could become a burden for people with a budget.

Fortunately, there is a way out for people who are short on time, does not want to spend a whole lot of money and keep the matter simple and less formal.

Court marriage is the way

Traditional marriage involves a grand ceremony, a big investment, days of celebration and flamboyant rituals. But marriage is not valid unless it is registered in the court of law. It is important to register every marriage and get hold on a marriage certificate which becomes producible evidence if such need arises.

Court marriage in Ghaziabad can be done either under Hindu marriage act, or under Special marriage act, provided the couple fulfils all the relevant eligibility criteria.

The solemnisation of marriage in Delhi requires the groom to be at least 21 years of age while the bride must be 18 years, and one of them must be an Indian citizen. For Hindu marriage act, both of the couple has to belong from either Hindu, Buddhist, Sikh or Jain community, while the Special marriage act takes care of individuals who does not belong to any of these communities.

Government offers the option of same day court marriage in Ghaziabad, which is a blessing for people who are short on time, also it is very inexpensive.

The couple must have a certificate of marriage from Arya samaj mandir under Hindu marriage act, 1955. Both of them must be of legal age and must bring their witnesses for marriage. Both of them should have their identity and address proof, and passport size photo.

The witnesses from both sides must bring their own identity and address proof as well. After the marriage is registered, the certificate of marriage can be obtained within 24 hours.

It is advisable for the couple to bring with them the divorce certificate at the marriage register’s office in case one of them is widow/widowed. In case death of earlier spouse, the death certificate must be produced before the registration of new marriage.

This simple, economical and hassle free procedure may encourage people to opt for in comparison to the traditional way, where it may take days, maybe months to plan and execute, requires a large gathering of people and extravagant decoration and rituals, and anything but economical.